Make the call: nosy or necessary?

As I sat down this morning to enjoy my coffee and to dive back in to Yongey Mingyur Rinpoche’s excellent book In Love with the World: A Monk’s Journey Through the Bardos of Living and Dying, I heard a large truck slow down in front of my house. I glanced out the window and saw that it was from a tree removal service. I immediately wondered where it was stopping and what neighbor was having work done.

My curiosity piqued when a crew began unloading equipment into the yard almost directly across the street from me. I kept watch. I saw them notify adjoining neighbors to move their cars, and that’s when my heart sank. I couldn’t believe it. The crew was going to take down one of the biggest trees on the block, an oak that had already lost its massive twin years ago. 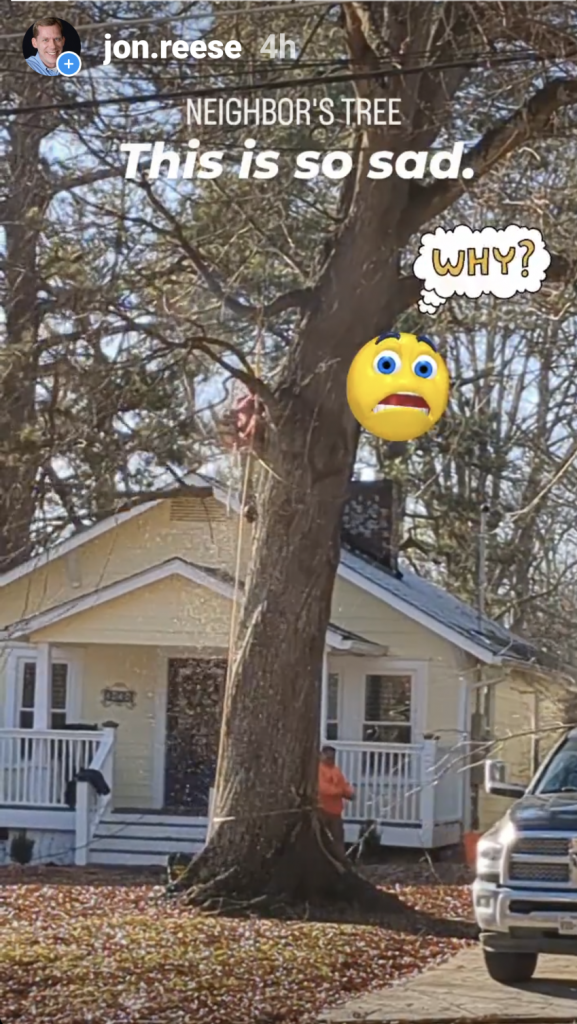 Unfortunately, I don’t know this neighbor yet since she only moved in several months ago and has done little more than scurry from car to house most days. Even her contiguous neighbors haven’t spoken with her. I know them, so I sent off a quick text: ‘They’re taking down the beautiful OLD tree – oh no! Did the neighbor have an arborist assess it to see if y’all’s houses were at risk?”

They both were home and sent back a quick reply: “They did not tell us about the big tree! Are they just trimming? No way DeKalb would let them take out the big one.” One of them went outside to inquire.

“Oh my god, they are. They definitely never mentioned that one. OK, we’re asking if they pulled a permit,” came the next text messages.

As they called the county’s arborist, I walked across the street to ask about the permit. The Spanish I’m learning from Duolingo didn’t prepare me adequately, but the worker who had brought his rental chipper understood my concern and phoned the tree boss. At this point, I secured the number of the father of the neighbor where the tree work was happening. He actually owns the house and had contracted the work.

Before I dialed him, I implored the crew to stop chainsawing lower boughs until we knew there was a permit. “They really have to stop sawing now,” I insisted. Then I white lied and said that code enforcement had been called. I fear this was communicated to the crew as “the police,” and I asked my translator to reassure them that this was not the case. He assured me that the tree boss was on his way “with the permit.”

I called the homeowner, explained who I was, and told him what was happening. He was as surprised as I was and said that the contract was for two small trees between the neighboring houses, not the stately behemoth. He apologized to me and said he was calling the contractor. Soon after, the boss arrived and video chatted with the homeowner as I stood close by. Indeed, the crew had made a mistake. The boss apologized and went to reassure my concerned neighbors.

It would have been a tragedy to fell a healthy tree whose seven foot circumference suggests that it is well over 100 years old. “I’m glad you were paying attention! I was packing up to get ready to leave and was clueless,” my neighbor texted. She said her call with the DeKalb County arborist confirmed that there was no permit, and he told her that the location of the tree on the property line would have required their consent. I had been an unapologetically nosy neighbor, y’all, and it literally saved a long-time branchy neighbor.

We recognize the nosy neighbor trope from countless television shows: “A neighbor (usually female) who just cannot keep to herself. Usually a grotesquely stereotyped shrewish gossip — always on the lookout for delicious secrets and rumors about the characters… They usually come in two types. The female type (though not always female) is the epitome of niceness, which serves as an excuse for her chronic curiosity. The second type is closer to the cranky neighbor and generally just wants to be left alone – until the main characters start acting suspiciously and he feels that he needs to protect his interests and verify that they are not doing anything that may disturb their peace. This usually ends with them going further and getting more involved than intended.” 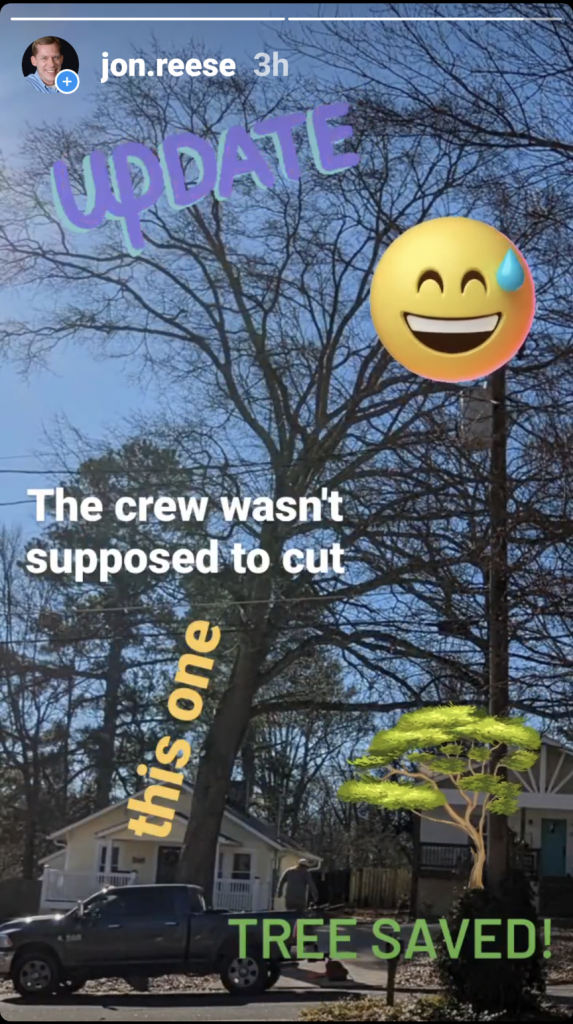 Homes.com has published “A Survey of the Nosiest Neighbors in the US,” and don’t worry: Georgia didn’t make the top ten. “Nosy neighbors are the ones who ask borderline intrusive questions, appear to be eavesdropping on your conversations, or have a particular curiosity about what’s being delivered to your home,” the site explains. “While we’re all guilty of occasionally peeking through the blinds to see what neighborhood kerfuffle is taking place outside, too many nosy habits can start to make homeowners feel downright peeved.”

Huffpost asked “Are Nosy Neighbors Good For Something?” and referenced a wild story from the LA Times about how an inquiry from James Caccavo helped save Sarah Cheiker, “left to die, if not for the meddling interference of nosy neighbors.”

Some of us are facing the dilemma of maintaining good relations with our neighbors while advocating against their use of harmful mosquito sprays, heavily-polluting gas lawn mowers, deafening leaf blowers, and wildlife-disrupting outdoor lighting. Isn’t there some kind of obligation to do (or say) the right thing, even when it comes with risks?

In his article “Collective Moral Responsibility,” Dr. David Risser explains: “As a social practice, as well as an important theoretical issue, moral responsibility has most often been understood in the context of relationships among friends, neighbors, co-workers, and family members. In this context, ascriptions of responsibility and judgments of blame are usually triggered by harm caused to one person by another.”

In my mind, the (near) destruction of my neighbor’s tree was a hyperlocal example of the “widespread harm” we silently witness all the time. If blurring the boundaries of neighborly etiquette and the conventions of property rights places a spotlight on the “wrongdoing” that’s jeopardizing biodiversity and creating long-term damage, I suggest we follow our hearts and prepare to get nosy.

JOIN US: The Climate Action Team extends a radical welcome to activists, contemplatives, readers, meditators, questioners, tree hugging hippies, scientists, policy wonks, radicals, pacifists, nature enthusiasts, and all who seek community as we navigate our changing times together. Contact Nicole Haines to connect to the CAT. Join us via Zoom on Monday, Feb. 20, at 7:30 PM. Learn more about the CAT here.

READ UP: Our peer-to-peer lending library boasts over 80 titles that cover a broad spectrum of environmental, climate, and ecospirituality topics. Review the list, schedule an exchange with the book owner, and cozy up with a book worth reading!

FUNDS AVAILABLE: The Carbon Offset Fund is now ready to offer grants. Read more here and consider working with another member or church group to prepare a grant request. The process is simple!