My husband, Gordon and I chose to investigate solar panels when we called Creative Solar in 2021 to come out and assess if our house could be right for that option. There are a lot of trees around our house, so we didn’t know.

Chaia Lewis from Creative Solar explained that about a quarter of the roof would work for solar if we cut back several branches of the massive oak tree that towered over the house. Going solar would cost about $23,000 plus tree work, so we were talking about a total of around $30,000. That was something we had to think about.

In the meantime, as a member of UUCA’s Climate Action Team, I participated last year in a talk by Solarize Atlanta, sponsored by Georgia Interfaith Power and Light, to encourage people to install solar panels. We could sign on the dotted line for the winning solar company to come out to our house to discuss it. And that company was, you guessed it, Creative Solar! We would get our panels at a reduced price because it was part of the Solarize Atlanta project. Creative Solar came out again, took $3,000 off the proposal, and we were in. If I had not been a member of the CAT, this would not have happened, and we would not have solar panels today. At the end of 2021, the contract was signed.

We had to cut two big branches off the huge tree, which received several expensive restorative treatments and is flourishing today. 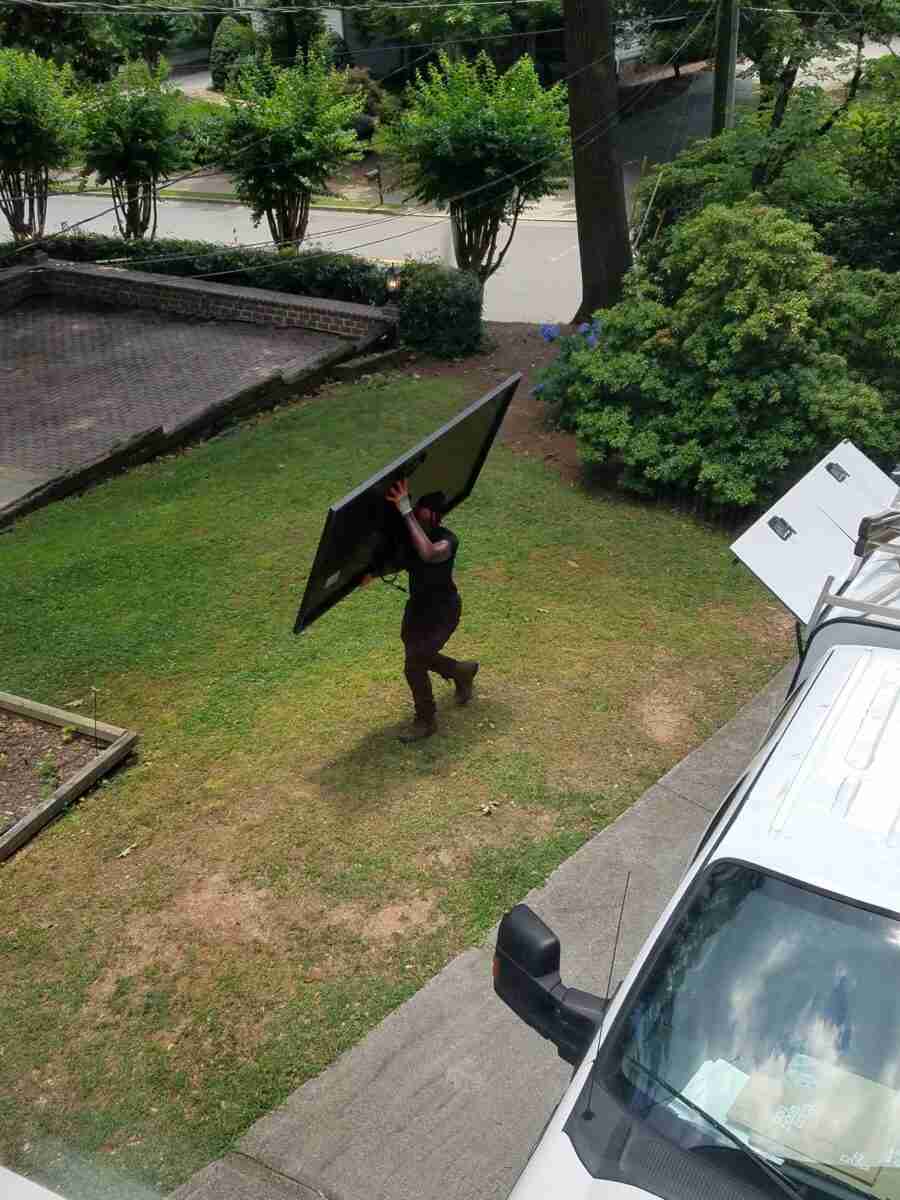 The project happened in a number of phases, with payments at the beginning of each phase and a final payment at the end. First was the design phase, when they decided how many panels we would need and where they would go. Then there was permitting by the City of Atlanta. Following that, the panels were supposed to be procured, but the company was out of the panels we had chosen. We could get better panels for $3,000 more – or nothing.  That led to a redesign. Now we had 21 recently available, very efficient panels. They were installed, which was very exciting!

The electrician connected them, and then the City of Atlanta came out to permit and found a number of problems. One issue was a garden in front of the control boxes installed on the side of our house. That garden had to go before the City would issue a permit. It took Gordon two hours to dismantle the garden. Now there is bare dirt and some weeds where the garden used to be. This actually turned out to be a good idea since later on, we had some problems and had to open the boxes to see if they were working correctly..

After the City permit, Georgia Power came out in August, charged us another fee to do something to the meter, and, finally, we had Permission to Operate! The Georgia Power worker flipped the switch, and voila, there was power!

We learned some things. Those 21 panels generate a LOT of power on a sunny day, in a bell-shaped curve from about 10:30 AM to 3:30 PM. Much of this electricity goes back to the grid.

Our household does not have net metering because that was limited to only 5000 customers statewide by Georgia Power and the state’s Public Service Commission. This cap on net metering has been a battle, and the Climate Action Team has been involved in this battle with the PSC. What is net metering, anyway? When a household with solar panels is charged for power, Georgia Power subtracts the 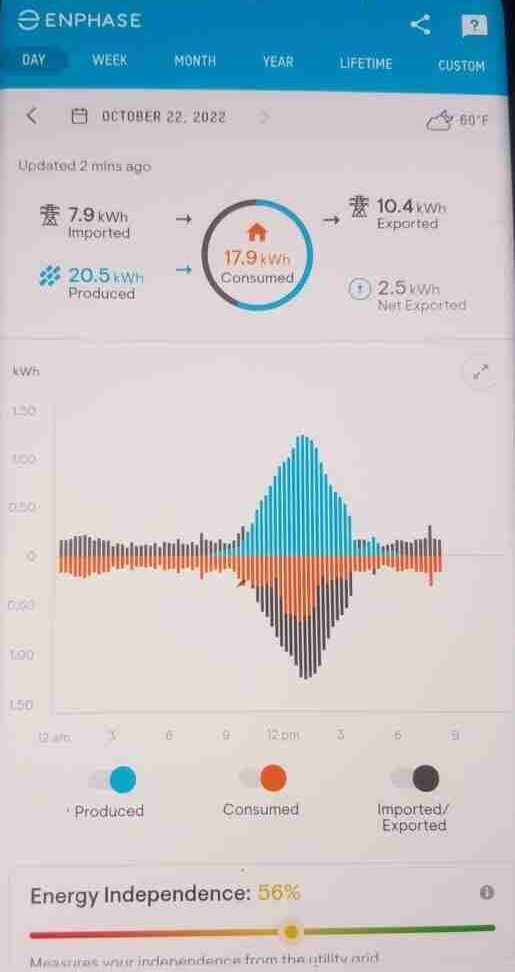 number of kilowatt (kWh) hours of solar power sent back to the grid from the amount the household uses and charges the household based on that. Under the present system, we send a lot of power back to the grid, and Georgia Power pays us 2 cents/kWh. It then turns around and charges us roughly 14 cents/kWh for the power we use. The utility thinks rooftop solar customers are cheating it out of the profit the company is entitled to if those customers do have net metering, so Georgia Power is opposed to more customers having it. In the latest vote, PSC commissioners  voted 3-2 to not expand net metering.

We would like to have net metering. In the absence of that, we have learned to work with the bell-shaped curve of solar production. On a sunny day, for example, we plug in one electric car at 10:30 AM, the next at 11:30, start the clothes dryer at noon, and so forth, unplugging as we go down the curve. We have learned not to charge our cars or use the clothes dryer at night. Those wet clothes can just sit in the washing machine until noon the next day! Our first post-solar-installation bill was $100 less than the previous month.

During our year-long process of moving to solar panels, President Biden and Congress passed the Inflation Reduction Act. For us, that means that next year, we expect a 30% tax credit on the $23,000 that we spent on the solar panels, plus a 30% tax credit on the initial tree work of $4,500, so that’s good. This would reduce the solar installation price to $16,100 plus the reduced price of tree work. In 24 years, at an estimated $75 per month saving, we will recover the expense for the solar panels plus the initial tree work and subsequent arborist tree treatments. Not counting tree work, we estimate we will recoup the money for just the solar panels in about 18 years.  Also, we expect the solar panels will enhance the resale value of our house. Our primary reason for installing solar panels was not to make money, however.  It was to reduce our carbon footprint to reduce global warming. It was to do the right thing.

And now we have electric cars powered by the sun, so how cool is that?

JOIN US: The Climate Action Team extends a radical welcome to activists, contemplatives, readers, meditators, questioners, tree hugging hippies, scientists, policy wonks, radicals, pacifists, nature enthusiasts, and all who seek community as we navigate our changing times together. Contact Nicole Haines to connect to the CAT. Our next meeting will be in person on Saturday, Jan. 7, at 1 PM at the church. Learn more about the CAT here.

FUNDS AVAILABLE: The Carbon Offset Fund is now ready to offer grants. Read more here and consider working with another member or church group to prepare a grant request. The process is really easy!