Two Octobers ago, Leonie A. Venhoeven, Jan Willem Bolderdijk, and Linda Steg published their study “Why Going Green Feels Good” in the Journal of Environmental Psychology. The researchers recognized from the outset that the effort required to “go green” could be perceived negatively.

“Environmentally-sustainable actions oftentimes involve a certain degree of discomfort or inconvenience. Taking the bike instead of the car to work, for instance, saves emissions, but requires physical effort and longer traveling time. Washing clothing at lower temperatures saves energy, but may leave stains intact. Recycling requires more effort than putting all garbage into the same bin,” they wrote.

Was this just a self-reporting bias, an effort by respondents to appear to share a socially desirable care for the environment? These scientists didn’t think so. With reputable methodology, the team set out to prove the hypothesis that “acting sustainably is often perceived as a morally-good choice and thus as a meaningful course of action, which can elicit positive emotions.” My last graduate research methods class is two decades behind me, so I will leave it to you scientific method enthusiasts to read the study and critique its design. 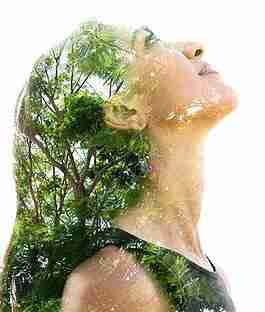 Let’s get to the nitty gritty of the findings. “Using a combination of methods and materials, our studies suggest that the previously found relationship between sustainable actions and anticipated positive instead of negative emotions is not merely a matter of social desirability, but rather a matter of meaning: acting sustainably is often perceived as a moral choice and thus as a meaningful course of action, which can elicit positive emotions, particularly when people choose to engage in those actions and feel that acting sustainably is an important personal goal,” they explained.

What about our business-as-usual overconsume-and-toss habits? The trio found that “acting unsustainably, despite that it is often more convenient, can elicit negative emotions, particularly when such actions are more meaningful: when people choose to engage in those actions, and when people feel that acting sustainably is an important personal goal.”

The final conclusion? Drumroll, please. “Our results support one explanation as to why people report that going green would make them feel good: these actions offer meaning.”

How useful is finding and reinforcing meaning in our lives? Very useful according to Dr. Clay Routledge, a social psychologist and professor of Psychology at North Dakota State University. “Meaning motivates. It makes people want to productively move forward in life,” he writes in Scientific American’s blog. “Meaning not only helps people cope with difficulties in life, it also promotes psychological health.”

If your experience of work commitments, family demands, health challenges, political news, home repairs, unavoidable traffic, and pandemic fatigue have you feeling caught in a relentless spin cycle of doom, you are not alone. Who has time and energy to consider the psychological and environmental impacts of the worsening climate crisis?

Actually, we all do. Examining how our daily choices align with our strongest values and love of the planet – especially with the support of others – leads to healthier habits, a wider view, and an encouraging sense of meaning. In the context of “deep time,” which considers the universe’s whole history, we can see our stardust selves as part of the infinite expanse. That perspective invites us to ground our everyday decisions in awe and sacred respect.

“We can bring deep time to mind as we go about our daily lives,” Joanna Macy and Chris Johnstone write in Active Hope. ”Even as we wash dishes, pay the bills, or go to meetings, we can school ourselves to be aware, now and then, of the hosts of ancestral and future beings surrounding us like a cloud of witnesses. We can remember the vaster story of our planet and let it imbue the most ordinary acts with meaning and purpose.”

And we can do all this for a reason that motivates us all: it feels good.

The Climate Action Team meets monthly via Zoom on the third Monday at 7:30 PM. Once each quarter, near an equinox or solstice, we gather in person for extended programming. We invite UUCA members and friends to join our supportive, Earth-loving team. Contact Nicole Haines at hip2bveg@gmail.com to learn more.

Have you pledged to be a Faith Climate Justice Voter yet? Do it soon and download Interfaith Power & Light’s non-partisan Faithful Voter Reflection Guide. We need everyone to make their voices heard this election season!