Wouldn’t you rather just ignore all this?

The climate is in crisis. Feeling an urge to click away from this blog post? You’re not alone, and author George Marshall knows why. 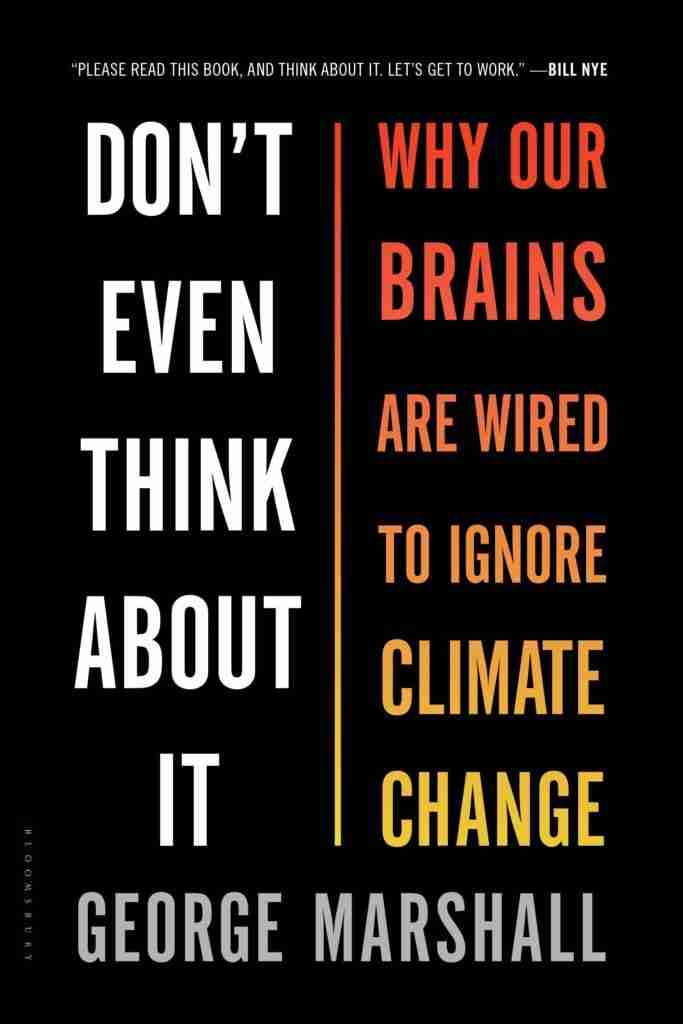 In his 2014 book Don’t Even Think About It: Why Our Brains Are Wired To Ignore Climate Change, a book our Climate Action Team read together last year, Marshall lays out the psychology that prevents us from fully engaging with the dominant issue of our time – and, likely, of all time.

Like many of us, I find myself navigating a range of emotions around climate change: shock, guilt, anxiety, fear, disillusionment, pessimism, and disbelief as well as curiosity, appreciation, hope, solidarity, and even a little optimism now and then. Contradictions abound. I’m doing what I can, but I’m not doing enough. I recognize that the problems are systemic, but I continue to participate in the systems. I strive to be present in this moment while the planet’s imperiled future is frequently on my mind. Corporations entice me to consume non-stop in order to promote limitless growth, but that mindset has led to greedy exploitation of both the Earth and our fellow humans. It feels overwhelming, and George Marshall has helped me understand it.

He writes that “accepting climate change requires far more than reading the right books, watching the right documentaries, or ticking off a checklist of well-meaning behaviors: It requires conviction, and this is difficult to form and even harder to maintain.”

“Far more”? I’ve read some of the right books! I just wrapped up a six-week study of All We Can Save: Truth, Courage, and Solutions for the Climate Crisis, and I’m reading Paul Hawken’s Regeneration: Ending the Climate Crisis in One Generation for an upcoming Georgia Conservancy book discussion. Throw in books by Charles Eisenstein, Bill McKibben, Jem Bendell, Joanna Macy – that’s not enough? And what about screening the 2019 documentary The Human Element with other CAT members at last week’s Georgia Interfaith Power and Light Green Team Summit? Oh, wait – I compost kitchen scraps, use bar soap, and recycle. I even converted my front lawn into a woodlands pollinator garden. You’re convinced of my conviction now, right?

OK, I admit, I’m frequently lulled into ignoring the realities of climate change, a privilege many around the world don’t enjoy. My understanding of habitat loss, global warming, environmental injustice, IPCC reports, pollution, and the Anthropocene is mostly cognitive and conceptual. That’s the realm I prefer to occupy. I don’t feel a specific threat to my current lifestyle, and I can casually delete the urgent emails from activist groups imploring me to speak up, act now, and – you know – donate. But my heart is waking up, and I owe some of that heart shift to Joanna Macy’s The Work That Reconnects, the EcoSattva Training offered through One Earth Sangha, and the writings Bill McKibben has collected in the anthology American Earth: Environmental Writing Since Thoreau.

“People yearn for normality and safety, and no one wants to be reminded of a growing global threat,” Marshall writes. When we’re comfortable, all seems right with the world, regardless of the data that contradicts this perception. I want all to be right with the world. I don’t mean to be callous to the suffering of climate refugees, vanishing species, and clear-cut forest ecosystems. It’s just a lot to hold. And – like you – I just don’t want to think about it. 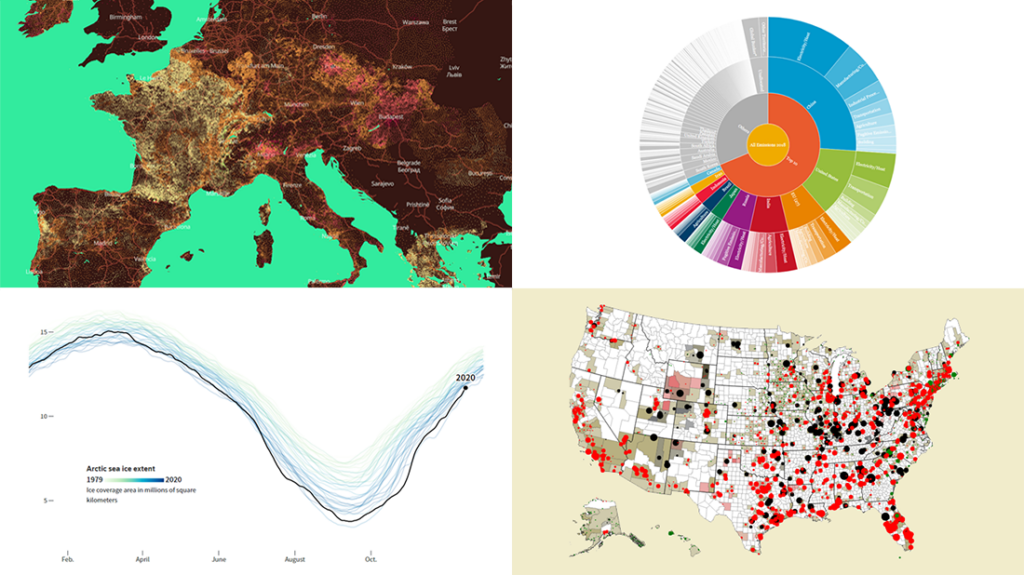 Climate activists have long relied on scientific explanations of what is happening to persuade us to care. Inconvenient Truth, anyone? In a fall 2021 national poll by AP-NORC, 59 percent of Americans said the Earth’s warming is very or extremely important to them as an issue, up from 49 percent in 2018. Why is it then, according to a 2021 Yale poll, that 64 percent of people rarely or never discuss global warming at least occasionally? Marshall suggests that “rational scientific data can lose against a compelling emotional story that speaks to people’s core values.” So we need to do more than think about it. Our hearts must take center stage.

“I have become convinced,” Marshall writes,”that the real battle for mass action will not be won through enemy narratives and that we need to find narratives based on cooperation, mutual interests, and our common humanity.” Enough with our rampant othering – of big oil executives, of lavish-living hedonists, of truth-blurring politicians, of climate change deniers. Our faith’s first principle underscores the inherent worth and dignity of every person; the second principle calls for compassion in human relations; the third stresses acceptance of one another; the sixth sets a goal of world community with peace, liberty, and justice for all; and the (CAT favorite) seventh principle upholds respect for the interdependent web of all existence of which we are a part. Aren’t those the core values that most in our congregation have subscribed to and to which we attune our hearts?

At the April 23 Climate Action Now rally at the Georgia statehouse, Rev. Gerald Durley instructed the crowd to accept the necessity of risk and sacrifice. That’s not familiar territory for me. I respect Rev. Durley’s six decades of personal experience with both the Civil Rights and environmental movements, and my heart knows he’s right.

In Marshall’s book, Nobel Prize-winning professor Daniel Kahneman acknowledges that “dealing with climate change requires that people accept certain short-term costs and reductions in their living standards in order to mitigate against higher but uncertain losses that are far in the future. This is a combination that… is exceptionally hard for us to accept.” That’s part of the sacrifice that I’m beginning to accept, a voluntary shift that stands in stark contrast to the involuntary sacrifices known to communities of color, Indigenous peoples, and impoverished areas around the globe. 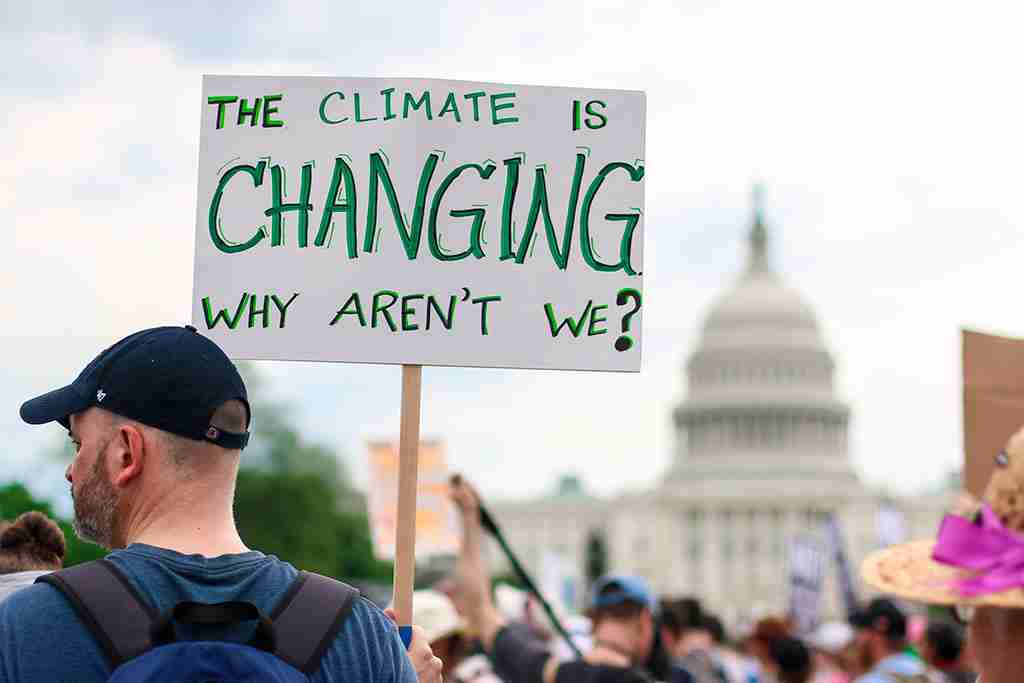 You’ve read this far, and you know your own thoughts best. How do you wrap your head and heart around all that you’re reading, learning, and experiencing? “We can define climate change as an economic problem, a technological problem, a social justice problem, a land use problem, a governance problem, an ideological battle between left and right worldviews, or a lack of respect for God’s creation. Each approach will generate different responses, different ways to share the costs, and, especially, different languages with which to justify action,” Marshall writes.

Are you – like me – feeling called to connect more deeply with the climate crisis? Are you ready to face your complicity in the planet’s destruction without turning away from the discomfort and without seeking solace in our culture’s myriad distractions? Marshall knows this is a tough ask. “It is much harder to argue one’s innocence when one knows that one’s actions are causing harm. If climate change becomes intentionally harmful only when people know they are causing it, is it any surprise that most people do everything they can to avoid learning about it or accepting that it exists?”

This emerging call led me over a year ago to join the Climate Action Team. I needed to spend time with others who weren’t afraid to think about all this, regardless of how our brains are wired to ignore climate change. Marshall sees great value in this kind of community: “People need to be in the place where their anxieties are recognized, to be able to say, ‘Yes, this is scary; this is hard,’ and only then… can we be truly mature, creative, strategic, and innovative.”

Let’s be rebellious and defy our brain’s wiring. Let’s feel our heart’s anguish and heed its compassion. Our worry is warranted, but our resolve as individuals and as a collective seems to be growing stronger.

Read a summary of George Marshall’s book here. Take a look at his list of 25 takeaways here. And if you’re interested in joining the defiant and Earth-loving Climate Action Team, email Nicole Haines at hip2bveg@gmail.com.