Learning from each other: A long-time “green” couple 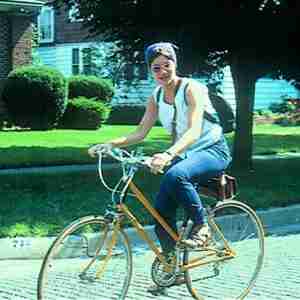 Pat and Bill Russell have been active with environmental causes since the first Earth Day in 1971. When they lived in Philadelphia, Bill rode his bike to work every day at the Customs House downtown. The couple even silkscreened t-shirts with the slogan “Bike It, You’ll Like It.” Pat was later active with an environmental group in Urbana, Illinois, called HIPS (Households Involved in Pollution Solutions), where she helped the group launch a recycling program for newspapers and aluminum cans.

The Russells left the Midwest in 1977 as Bill was growing more interested in solar energy and wanted to live in the sunbelt. He had graduated with a masters degree in architecture and chose to work in Atlanta and collaborate with another colleague on solar energy. Early efforts to produce electricity with solar panels weren’t stellar, and under the Reagan administration, “all the energy efficiency ideas went out the window,” Pat said.

As a longtime friend of UUCA, Pat joined with Hoke Kimball to launch the congregation’s Climate Action Team in March of 2017. “Hoke and I looked at each other and said none of the other topics matter if we don’t address global warming and the climate issue,” Pat said.

Working with a number of women from UUCA and elsewhere, Pat now co-leads Together Women Rise (formerly known as Dining for Women), a group that helps educate women in third world countries. Before Covid, the group met monthly in homes for dinner. Members would donate an amount equivalent to dining out to support a chosen grant to a national organization. They watched videos about the organizations to learn how they served women and their rural villages. The chapter, started in 2016 by UUCA’s Ines Hoster, has raised over $34,000 since it began.

“I felt even stronger about the organization after hearing Paul Hawken speak on Drawdown at the Carter Center,” Pat said. “When he mentioned educating women in third world countries was number 13 on the list of 100 ideas, the light went on in my brain. He went on to explain that it was the women in the undeveloped countries who were in charge of farming practices and producing food for their families. Educating them would also lower birth rates and help control populations.”

The Russells have always been committed to energy alternatives. When they needed to replace their car in 2009, they were excited by the prospect of a reliable hybrid vehicle and purchased a Toyota Prius. “We wanted the most efficient car that would use the least amount of gasoline to help decrease the consumption of oil,” Pat said. “We have loved the car and have no regrets except that we call the gas gauge the ‘guess gauge.’ The 2009 has a flexible gas tank, so we’re never quite sure how much gas is left. I believe that has been changed in subsequent models.”

The couple isn’t sure if they will transition to an all-electric vehicle for their next purchase. “We have been discussing it lately because we probably will purchase one more car in our lifetime,” Pat said. “We are not ready to jump to an all-electric car yet, but we do realize it’s probably the car of the future.”

Why the reluctance? “One consideration is who is providing the electricity. If it is a coal company, then you are still using fossil fuels. The mileage range is another consideration, as is the location of charging stations. We often drive to Athens, which is 65 miles away, and sometimes to our cabin in north Georgia, which is 100 miles,” she said.

Over the years, Pat and Bill have driven their Prius across the country and up into Canada, but they’re not planning long drives like that anymore. Pat thinks their next car might be a hybrid plug-in Prius.

At their home, the Russells chose to install solar panels a few years ago. That opportunity had been decades in the making. “Bill was thrilled when solar energy came back into being after so many years of ignoring it,” Pat said. 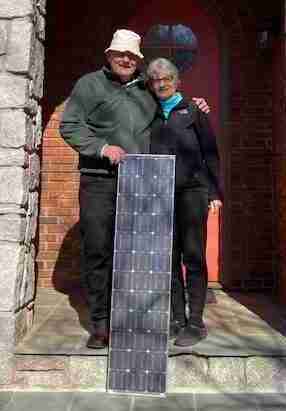 The Russells show off a solar panel used by Georgia Tech in 1980 to promote solar usage.

The couple attended a 2018 presentation by Solarize Atlanta and decided to schedule an installation. “It was quite an investment, but we decided to do it because it was the right thing to do,” Pat said.

They decided not to add battery storage, in part because they felt that battery technology was changing too fast. They ended up with 22 panels – 14 on their home’s west side and eight on its east side. The Russells aren’t the only ones on their street who took the plunge. A neighboring house had panels added at the same time, and a year later, another neighbor had them installed.

How does the return on investment work? Right after the Russells’ installation, Georgia Power was not offering net metering. Creative Solar USA explains how net metering works: “When the sun is out and your solar panels produce energy, that energy is first consumed in your home or business. If the solar panels are producing more energy than is being consumed by the house or facility at that moment, the excess energy is then sent to the electric grid in exchange for credits on your monthly utility bill. Net Energy Metering (NEM) in essence ensures that you receive a full retail credit for that instantaneous excess energy.”

Several months after their installation, Georgia Power changed course and decided to offer net metering, so the utility provided the Russells a retroactive credit. “We had about three monthly power bills in the hot summer that were $10 or $11, so now we think the return on investment may be sooner than previously thought,” Pat said.

Georgia Power has capped participation in the net metering program to 5000 installations, so households who install solar now do not benefit from the program. “While the Georgia Public Service Commission enacted the progressive ‘net-metering’ program in 2019, Georgia Power, which never welcomed greater competition from customers with rooftop solar, used its influence to limit participation,” wrote James Bruggers in a piece published by The Current. In that piece, a Georgia Power spokesperson said he expected the Public Service Commission to revisit the program during a review of its next three-year integrated resource plan.

Finances were not the Russells’ prime motivator, though. “Honestly, it is the feeling of doing the responsible thing for us versus the bank account,” Pat said. “We have two granddaughters, ages 11 and 15, and we hope to set an example for them.”

The Climate Action Team would love to share YOUR story with the congregation so we can continue learning from each other. Email me at reeseindecatur@gmail.com to let me know about your attempts, successes, and failures in living more sustainably – it’s all instructive!