Why I Love my PHEV! 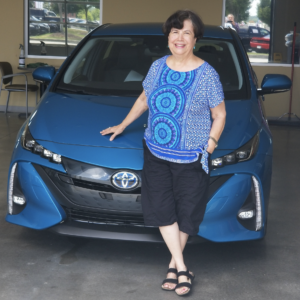 What, you may wonder, is a PHEV?  Glad you asked. A PHEV is a plug-in hybrid electric vehicle.  In my case, it is a 2019 Toyota Prius Prime Plug-in Hybrid.  That’s the first thing I want you to know.  The second thing is, it is overwhelmingly an electric car.  I imagine that, often people think, a plug-in hybrid.  That’s a little bit different from a hybrid.  Maybe half the time you run on electricity, and half the time, on gas, some people think.  Something like that.  My car officially has a range of only 25 miles on electricity; actually, when fully charged, it will run 30 miles before switching to gas.  I don’t often drive long distances; my driving is mostly around town, so I seldom run out of charge before my trip is through.  For me, this car is an electric car with gas engine backup.

Previously, I had a Toyota Prius Hybrid (not plug-in).  It was very gas efficient, and I filled up about once a month.  That’s pretty good, right?  With the Prius Prime, I have not gotten gas in over a year, yet the gas tank is still 3/8 full.  About once a month, my car switches to the gas motor.  They talk about how high the price of gas is on television, and how everyone is so upset about it, but it has no relevance to me.  I barely know what they mean.

Several trips to Gibbs Gardens used gas; that accounts for most of my car’s gas usage.  Last time we went, my husband and I drove about ten miles farther to Jasper.  An app on my phone called PlugShare locates charging stations around the country, and there was a Level 3 charger, which was free, in front of the Atlantic Coast Conservatory.  I plugged my empty car into the charger and went off to lunch.  When we got back, two hours later, the car was fully charged.  We thanked the people at the conservatory.  They said they were happy to provide this service for free, to benefit other people and the planet.  (I think this would be a great thing for UUCA to do!)  I drove home and the charge was not totally empty by the time I got home two hours later.  In a situation like this, on the highway, there is an HV/EV setting which uses some gas and some electricity for maximum efficiency.  It takes six hours, when the car is charging in the home garage, for it to go from empty to fully charged.

Why not just get an all-electric car?  Good question.  It is the dreaded range anxiety.  With an electric car, you can just totally run out of electricity and end up stranded.  The manufacturer that best addresses this is Tesla.  Their vehicles have a range of about 300 miles and a national network of charging stations, just for Teslas.  But Teslas are expensive, more expensive than my car.  In time to come, there should be many more charging stations curtesy of the federal Infrastructure Bill.  Then hopefully all-electric cars will be far more user-friendly.

What do I love about my car?  The number one thing is:  I feel I am doing the right thing.  Climate change is a real and present danger.  Owning this car, I feel I am doing something about global warming.  That is very important to me.

But there are other things I love.  It is so high-tech, it is a challenge.  It has many safety features, like a back-up camera, all sorts of warnings if you are near the white line on the road or are near another car, and automatic brake protection.  It has the legendary Toyota reliability.  It has hands-free smart phone capability.  It is smarter than me.  I don’t yet use many of the features because it is so high-tech.  It has a steering wheel warmer that is delightful on cold days.  I feel safe when driving this car, even when driving in rain on the expressway.  It has automatic windshield wiper and headlight control; I have finally mastered these.  Also, we got a federal tax benefit when my husband and I bought PHEV’s.

Soon after I got my car, I came to think of it as like a smartphone on wheels, what with its being so smart, and constantly needing recharging.

There are things I don’t like about my car.  It doesn’t have a CD player, so I can’t play my CD’s on it.  There is a high tech way to address this problem but I am not there yet.  Also, the car only seats four.  In the 2020 version and beyond, the Prius Prime seats five.

One thing “Car and Driver” is put off by, with my car, is that it has outrageous futuristic styling, in their opinion.  But I actually like that about the Prius Prime.

My husband and I have exactly the same car, except his is white and mine is blue.  It is helpful to have the same car, as he has learned some things about it, and I know some things.  We conserve a great deal regarding gas emissions, which significantly mitigates climate change.  It has been over a year since either one of us has gotten gas, and we have driven to North Carolina and back in his car.

There are 35 versions of the PHEV on the road today.  Click HERE for more about information.

Do you have an electric car you love?  Or questions or comments about this article?  Please contact me, Sue Certain, at sccertain@comcast.net  if you do.  Maybe you would like to write about your beloved electric car or PHEV for our CAT blog.  We would consider that.  I’d love to hear from you.  Thank you.